This is an old post from my other blogsite. I’m re-posting it here because I think this is where it belongs.

The title is Real/imagined online conversation  on the Internet, but the fact is, this is a real conversation I had  with a friend  from a manga forum.

Bostongal—– I do believe Kyou. Even when he was with Akari, and knew Shino liked him, he didn’t cheat on Akari when he had the chance. Rereading the story gave me a different perspective on Kyou, but yeah, I still think that his sneaking and “abandonment ” of Shino were just too much.  He should have known it was wrong, hurtful and destructive. He could have told Shino, ” Look, I need to do this with Akari, she’s troubled and might harm herself, and , I’m sorry , Shino, I  need to know  what the hell those 10 months Akari and I were together were about, I want to know if all  of that was one big lie. I want closure

Ren    ——– How can Shino believe him when she knows for a fact she’s with him now on the rebound?  She had seen how devastated Kyou was when Akari left him.  She knows  she practically offered herself as replacement of Akari in Kyou’s bed.   When did Akari leave him ?  Just 4 months ago. In just one month, Shino had managed to ” comfort” Kyou’s broken heart .  But that’s just comfort sex. Shino is aware that whatever feelings he might have for her are not deep enough to replace Akira in his heart. After all, Kyou was already planning to marry Akari when she left him.

If Kyou’s reason  was purely altruistic, why  did he have to make his meetings with Akari a secret ? And damn it, how much closure does he want?  He stayed all day, and all night with her that first day. He came home the next day.  The fudge ! That was a lot of conversation,  a lot of time exchanging pleasantries…. what else did they do? Played video games?  Talked about the book she wrote ?  So what if he told Shino  “I didn’t F*ck Akari ?

“ Tell that to the Marines.  He saw her for 2 damn weeks and would have continued seeing her  if he wasn’t busted ! Oh, and take note, Bostongal, he always took a bath as soon as he got home, before Shino got home…. not his routine at all.

Bostongal—–I totally get why Kyou wants closure.  Akari lied about everything, including her real age,  and she was the girl he wanted to marry. He had the rug completely pulled out under him.  He wanted answers in order to heal his heart and move on, because as long as questions stay up in air, he’s gonna wonder, and wondering means something stays open  and painful.

Ha ha ! That bathing thing cracked me up.  I don’t know if he normally took a bath at night. The story never established that.  I think   dealing with a batshit chick with grief issues was stressful,  and I guess bathing as soon as he got home  would remove the stress. LOL 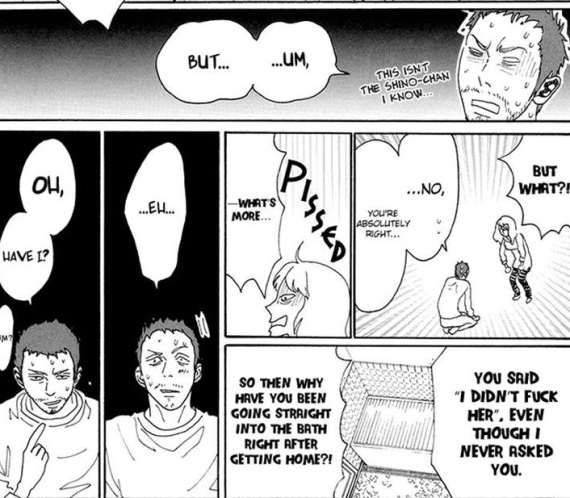 Ren——- Girl, the devil is in the details. Do you know my mother’s friend found out her husband was cheating when she noticed his hair was always damp when he got home from work ? ( He was late too ) . The author would not  write in as mundane and innocuous as  Kyou’s daily bath ritual if it wasn’t signifiicant.  Through Shino’s POV, it was mentioned at least 3 times.

First day they were together the entire day, night,  morning next day.  Knowing Akari ( and Kyou, that horny bastard )  , all she has to do is take off her clothes and open her legs, and Bam.  There’s no doubt that  they had sex . Akari  is hot in the sack, sexy, and Kyou still has feelings for her. ( Sorry  my language is getting crude. ) She’d be able to lead her by the nose.  Easy.  Who would believe that Kyou and Akari just sat in the couch and talked, and talked, and talked ? How much time does he need for closure ?  One hour ! ! No, one second. What does he need a closure for , anyway ? That’s just an excuse., and an incredibly lame one too.  And he went to see her for 2  freakin’ weeks, everyday, very early in the  morning before he went to work.,” cutting his sleeping hours. ”  Sex in the morning with Akari, and sex in the evening with Shino.  How lucky can he get, that manwhore. And the sex must have been so steamy that cloying jasmine scent didn’t entirely disappear.

Bostongal—–Okay, Ren, bear with me. I have decided to put my grudge aside  and look at clues again. We might be misreading Kyou,  and he ‘s actually telling the truth. ( at least, about the sex thing ) Kyou is a crappy liar.  So, in those scenes where he talks about why he visits Akari, he seems to look totally honest.  He’s not fidgeting, making faces, looking freaky.  Kyou is soft-hearted , and  he has to lie  so as not to hurt Shino.  Darn it, Shino beat him up , and he just took it.

(Read from right to left.) 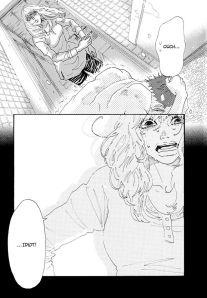 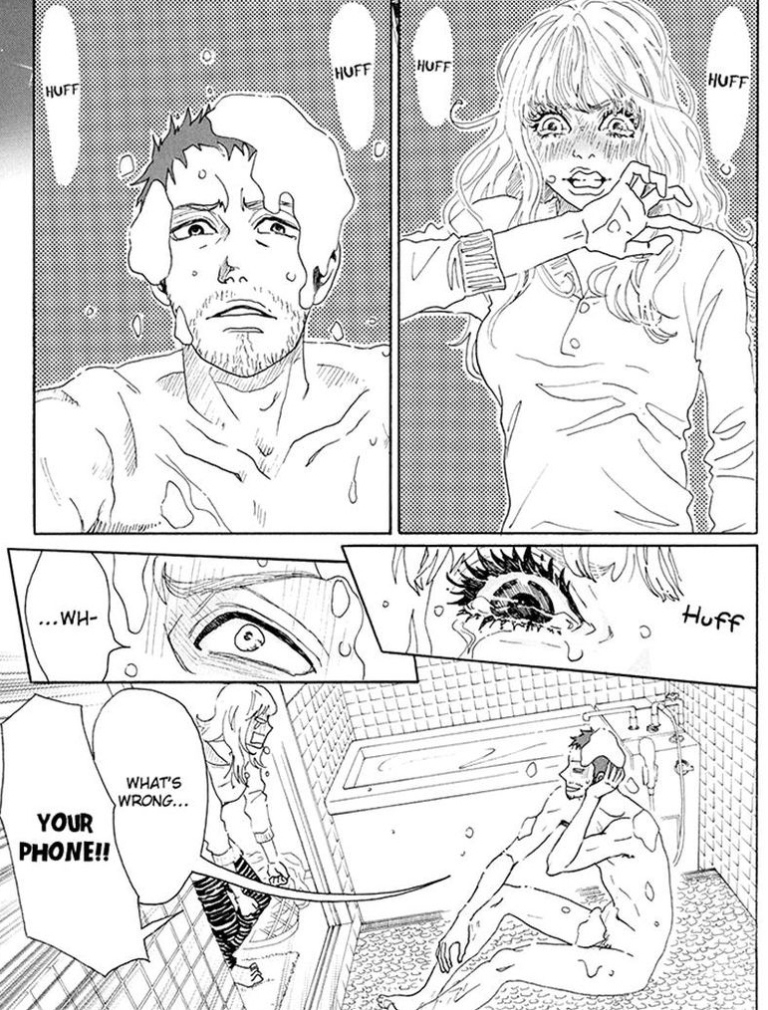 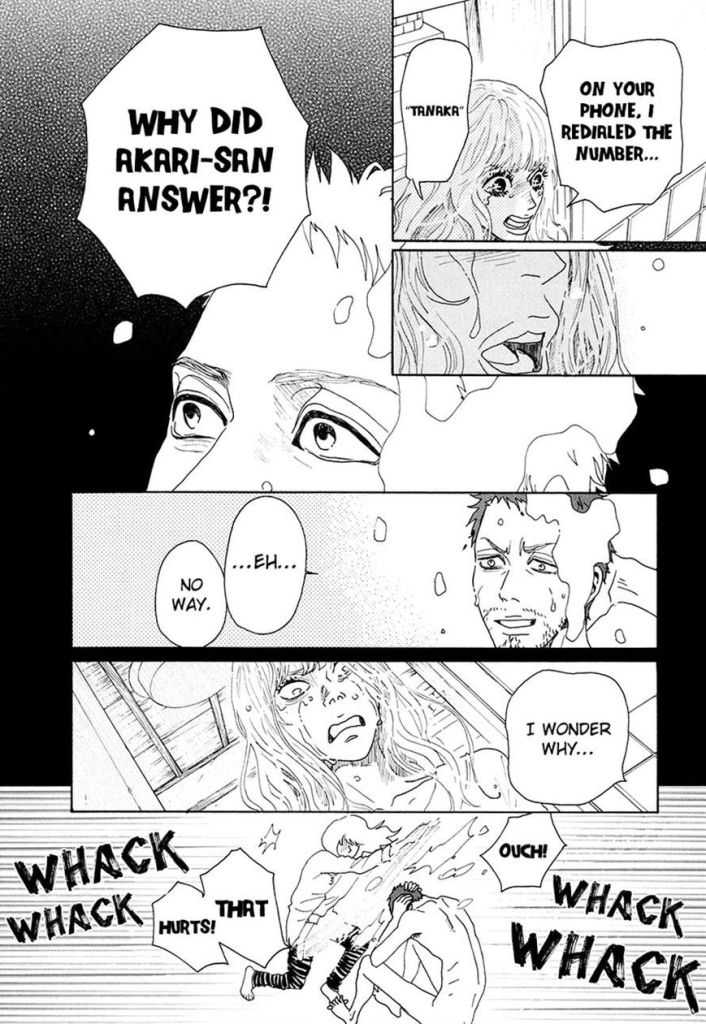 .Ren ———  He lied . So many times.  The author  didn’t have to draw the situation in bold Crayola.  We don’t need frames in the story  of Akari and Kyou going at it.  It was so obvious he might as well have written “I’m  cheating ” on his freakin forehead .Holy sh*t. What was the  lie again  why he didn’t come home that first day ? He got a call  that his best friend  ” Tanaka ”  was in a car accident, and was in a hospital. So, from morning to morning next day, he was in the hospital ,  taking care of ” him”.  Wow !  Best , best friend.  The next day, and for 2 weeks on, he left  very early  in the morning to visit his ” friend”  before he went to work. And Shino gave food to Kyou to give to ” Tanaka. “ 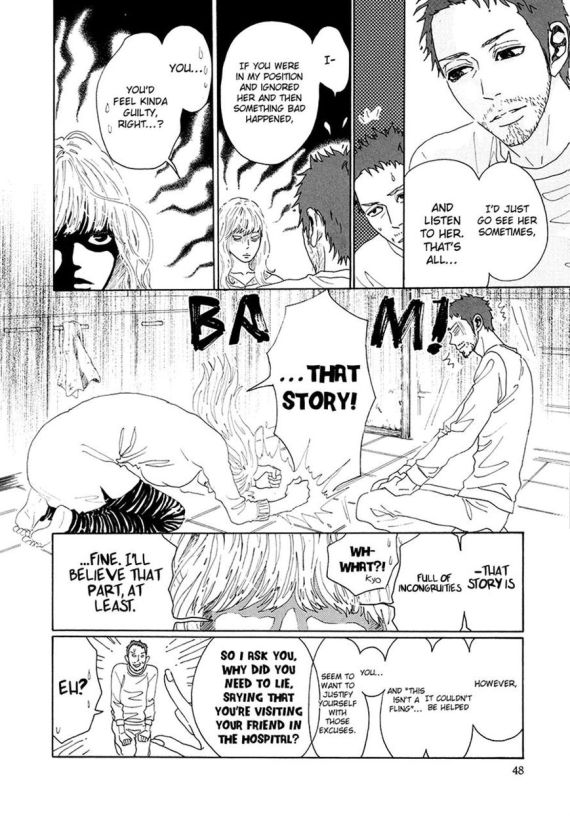 .Ren—– I can’t wrap my head around the fact that he secretly met up with Akari again after getting busted.

Bostongal— I think that meeting was a final check-in. Akari called Shino to  tell her she and Kyou saw each other again, probably a revenge ” screw with Shino call “. I believe Kyou when he said he’s done with Akari and will never see her again.

Ren—– Shino left him.  Good for her. If there’s no trust, there’s no love.  They go hand in hand. It’s kind of hard to trust  men. Someone said men  can only be trusted when they are old and wrinkled and cannot get it up anymore.  Even if they love their partner, when another woman opens her legs for them, they’ll take it. I believe Kyou loves Shino too, she’s nice and kindhearted,  but Akari  is the woman he once loved and wanted to spend the rest of his life with not too long ago. He couldn’t have forgotten her that easily and quickly.

Bostongal—-Harsh. Well, I’d trust mine in a room full of naked willing women, just as he could trust me  even if Gerard Butler threw himself on me. But in general, yeah, men are horndogs.

Ren—– The vampire guy who sparkled in Twilight, Edward Cullen. He he he

Hahahah ! ! Thank  you for reading, guys. And sorry, I can’t remember the title of this particular  manga. The genre is josei, I’m sure of this, but I don’t have time to search for the title.