B: The Beginning  is an ” authentic” Netflix Original series whose original title is Perfect Bones.   ( unlike other Netflix originals like FullMetal Alchemist , Brotherhood, which Netflix touts as ” original” , but it isn’t , we all know that.  ) But I like that Netflix is introducing animes  worldwide to people who don’t even know what animes are, or , that animes are not all about jiggly boobs and panty shots.  I consider B : The Beginning as one of these few gateway animes  that one  can introduce  to a  friend who is not an anime fan.

B: The Beginning is a Netflix original  produced by  Production IG , and directed by Kazuto Nakazawa and  Yoshiki Yamakawa. It is the  company that  produced Haikyu!!, Attack on Titan, Psycho-Pass, Ghost in the Shell, Evangelion ,  and many more.

And now the story….. please check out now if you do not want to read Spoilers ! ! 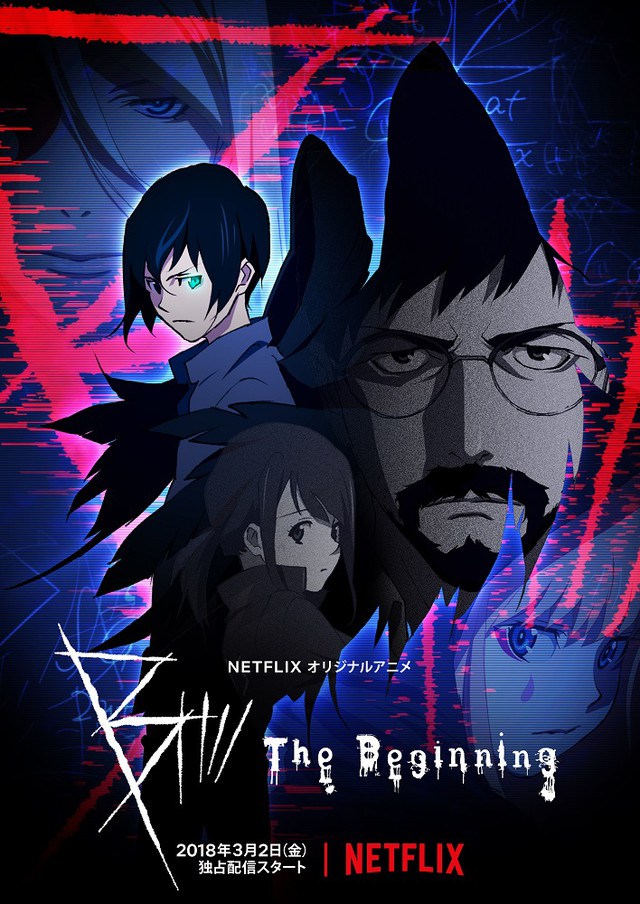 The  main protagonists  are Keith Flick or Genie, Kuko, and  Lily. Keith is a veteran police investigator, a genius, who has retired from the service  when his young sister is murdered 10 years past, and is now brought back  to help in the investigation of a series of killings in the city.  ( By the way, it does not reveal right away the murdered  girl is Keith’s sister…..  I thought she was his wife or girlfriend , so, that’s a spoiler ) .  The city is now full of psychopaths that randomly murder  people but for some reason, there is another ” killer ” whom the police force call Killer B but think this one is a ” misguided ”  friend  who only kills  psychopaths. The letter B ( with 4 slashes ) is a mark left by the ” friendly ” killer after a kill. ( check out the image above )  Kuko is a very nice, kindly young violin repairman  who works for Lily’s father. Lily works for the RIS. ( Royal Investigation Service . )

It is obviously clear early on that Kuko is Killer B. ( Episode 1 ) But he is the good guy, and he is the protagonist that represents the sci-fy /supernatural  element of this anime.

There are actually 2 story lines in his anime….. one is the supernatural element  represented by Kuko and a group of  Reggies  ( demihumans, the bad guys  )led by Minatsuki……

and the human group , led by Keith , Lily ,and important side characters who are police officers,(  such as Kaele, the computer genius….. I like this character  ), Boris, Eric, Mario, Brandon.

While the police led by Keith is solving the seemingly random mystery killings, Kuko’s killings are related to his search for his childhood friend, Yuna,  ( I suspect his fated bride/lover ) whom he now  knows is with  Minatsuki’s group. The two mysteries  or story lines will blend together and be cohesive by middle of the 12 episode series.

I am really tempted to post some big spoilers here because there  are so many twists and turns and revelations . Without spoilers , this post doesn’t make sense at all, unfortunately.

I urge you to watch this awesome original Netflix anime.  Netflix is showing these animes to millions and millions of its subscribers worldwide , and paying anime producers  so much more than , say, Crunchyroll , whose subscribers are limited to anime fans.

I hope they will give us a second season of B. The ending leaves us with a cliffhanger (  a teaser will appear after the ending credits ) with the appearance of another of Kuko’s childhood friend ( a boy, I’ve forgotten his name, aaaaargh ! )  ) who has sworn to  protect Kuko , and whom we see on Kuko’s flashback to have died trying to protect him and who has given Kuko his left arm, the one that turns into a blue blade that can easily kill reggies,  the rogue demihumans.

So, please,  watch this anime.  My next post will be the story of B: The Beginning. and you will be truly spoiled ! Sorry !

Thank you for reading. Bye !