I’m not motivated to post anything here when no one is reading this anyways,  except a few , and  I do appreciate it,  guys… you know who you are.

Anyway,  I’m not posting to be emo or whatnot.  I’m just musing.

I’m running out of  good animes to watch, seriously. I guess it’s my fault ?  I’ve limited myself to animes with  zero fanservice. The problem is, developers  have decided to put in this kind of stuff in the mistaken belief that this is what majority of anime fans desire.  They are wrong. A lot fans , like myself , have had enough of this cr*p. If  showing  humungous boobs and panty shots  drives the story forward, fine.  If they are just there to tittilate  the libido of male fans,  I think  they are doing the anime industry a great disservice. 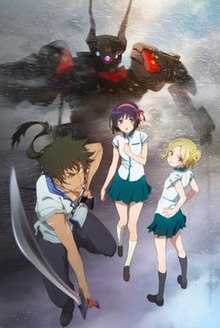 I just re- watched Kuromukuro  on Netflix  last night… my 4 th time, in fact.  For the summary,  it’s  right there on Wikipedia . Suffice it to say, it’s of mecha genre,  with little or no romance in it, as of yet,  and if  romance ever comes in the near future,I’m not sure   it will go where I want it to go.  It does give me a nagging Inuyasha vibe, where for more than  half of the episodes, no, erase that, up to the last current episode, the male MC, Konnusuke, does nothing but pine for his princess , Yukihime, ( and exact revenge for  her death 450 years ago, and the destruction of his clan by ” ogres ” ) , while a cute , and almost the exact replica of Princess Yukihime, Yukina,   is right under his nose…….  much like Inuyasha  still having the hots for his dead lover what’s-her-face,(  who’s been brought to life, dammit,) almost up to the end of the series,   while the living , kindly  Kagome  suffers a painful, unrequited love. Will Yukina meet the same fate ?  No matter, there’s Yukina’s classmate  who will follow her to the ends of the earth. I don’t mind Yukina ending with him. He’s a good guy.

I can’t say anything about the rest of the plot, most especially the battles between the aliens and the humans. I have no idea what makes a great battle.    If I enjoy it, that’s good enough for me.  And there’s mystery enough to keep the anime going.  Unfortunately, Netflix  has gotten the rights  to air this anime, and calls it a Netflix Original, and that means,  we will most likely watch the rest of the episodes a year from now,  darn it.  Yep, Netflix will dump the rest of the episodes on us in one go, and we’ll binge watch, as expected. Netflix  is  well known for binge – watching, isn’t it ?   Unfortunately for Netflix,  YouTube has the episodes up to 22 * smirks * and , you bet I got to watch it.

I have a feeling  my ship ( Kennosuke x Yukina ) will not sail.  Ken’s feelings for his Princess Yukihime ,( and now for Muetta who emerges as Yukihime’s clone in the 21st century ) are just too strong. She’s his sole  reason for living.   Okay, that’s a spoiler,  but that’s as far as I go.

I can’t wait for what will happen next.  The aliens reveal they have actually scattered ” seeds” / human DNA’s of the people they have captured 450 years ago. Yukina  looks exactly like the Princess. Could she be….. ???

Come to think of it, there are so much parallelisms between  Inuyasha and Kuromukuro.  It is implied that Kagome is the descendant of Inuyasha’s dead  ex. and most likely,  Yukina  and  the Princess have the same DNA.  And both male protagonists have rivals waiting in the wings,  and Kennosuke goes to the  modern day era,  while Kagome  goes back hundreds of years ago,    to Inuyasha’s time.

It’s also fun to watch how kennosuke adjusts his life , from an 17 th century samurai to being comfortable with computers and tablets and smart phones…. not to mention GPS.