I have so much swirling on my mind that I don’t know which  one to tackle first…….. Persona 4, the anime, or Chivalry of the Failed Knight ( which I like ),  or maybe  some thoughts on  outsourcing of anime and cartoons from Japan and USA to  other Asian countries. On second thought,  I guess  I’d write a bit about  this outsourcing stuff, and Chivalry of the Failed Knight, that is,  if  I don’t get to write too much on the subject of outsourcing, which is a delicate matter for Americans……. and this has ,  in fact,  become a contentious issue  among political candidates here in the US. These overseas companies are taking jobs away from Americans. To be honest, I believe that, too. 90% of American cartoons are already made in Asia, particularly in the Philippines,  where Warner Bros. for example has set up a full-pledge animation studio,  Toei , Japan, as well, Cartoon Network, Hanna Barbera ( almost 100%  developed in the Philippines… Flinstones, Yogi Bear etc are made entirely in the Philippines, since the early 80’s   ), Nickelodeon,  Marvel, Universal Studious , and yes, Disney.

Marvel has  so many Filipino illustrators in the US that  they were allowed to create a Filipino  mutant ( or woman ) . Do you know that girl who can pass thru walls ?  And there’s this  big-muscled  brown supposedly Asian mutant   with a Hispanic name …. yep, they are Filipinos ( but not popular, teehee ). Oh, and Wolverine’s illustrator is a Filipino.

If the trend  continuous, the Philippines may well become the cartoon capital of the world, according to business insiders.   American animation companies, though, have been doing this in secret, and that’s  quite understandable, given the situation here in the US.  This has been going on since the early ’80’s.  So guys,  you may not like it, but  Sailor Moon,  One Piece, Slam Dunk, DigiMon,  Dragon Ball, to name a few,  are made in the Philippines, since the early 80’s. 101 Dalmatians, Tom and Jerry, Little Mermaid ( the TV series)  Mickey Mouse, Buzz Lightyear,  to name a few,  are made in the Philippines, as well,QUIETLY  and SECRETLY.  However, Filipino illustrators are now clamoring to be recognized in the credits.

So, why do they outsource  it to the Philippines, particulary  from American animation studios ?  1.  Besides the obvious one, ( the cost is cut in half ), 2.  Filipinos understand Western sense of humor perfectly,  and the nuances of the English language.  The Philippines was a US colony for 50 years,  and that’s why Filipinos  get it. And thirdly,  and this is most important, ( and sad, in my opinion )  comics has been a part of Filipino culture  since the early 1900’s.  I’m guessing this is an American influence on the Filipinos’ consciousness.  The Philippines had been publishing  comics since the early 20’s  (  the most famous  character since 1926  was  Kenkoy, and his everyday life as a Filipino teenager in the 20’s ) , and since then, comics had proliferated.    The Philipines, in fact,   has been reading manga – like  stories  earlier than  Japan. Some illustrated serials lasted years  , and   were avidly and eagerly followed  on a weekly basis.   The popularity of comics ( komiks )  was so widespread  that the Philippines became  one of the biggest publishers of comics magazines in the world ( second to the US ), pre 1990, after which it waned.

The illustration below is that of  Filipino wonder woman DARNA, originally  named Varga  when it was first published in 1939, then morphed into Darna   in 1947. 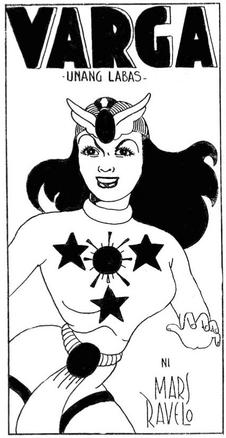 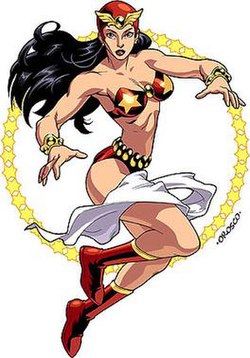 Come to think of it, Darna is sexier than American  Wonder Woman. Why ? Look at the bottom bikini, It’s high cut, ha ha.  Varga ‘s costume to Darna’s… you’ve come a long way, baby.  Even in current standard, that costume it’s on the risqué side, don’t you think so ?  By the way,  Varga  came out much earlier than  American Wonder Woman. In other words,  a Filipino woman’s place in Philippine culture was not typical of that era, especially in Asia. Philippine society is , in fact, matriarchal.

But  here’s a superhero copycat,  the Philippines’  version of Captain America. (  Captain Barbell ! !) Oh, before I forget, the Darna and above photos are courtesy of Wikipedia. Captain Barbell’s is from  ernee’s corner

Here’s the thing…… I’m not saying Filipinos have comics mentality.  Comics that time  was a very cheap form of entertainment for poor Filipinos.  Farmers taking a break from back-breaking work  would seat under a tree  and read. There was no TV ,  and no cinema in remote farming towns.

This is all for now.  Please comment, and let me know about outsourcing.

I guess there’s no Chivalry of a Failed Knight on this post. I talked too much. Ha ha

9 thoughts on “Anime outsourcing and the Philippines’s Comics culture”