This  my fourth post.  Now I promised I’d write about Gunslinger Girl, and Hiiro no Kakera   after my  Moribito  post,  but I got to watch Golden Time this week and decided I ‘d post about this ” romance ” anime  first.  I liked Golden Time enough that  normally, I’d have  given it, at most, a 9/10 , (a high one for romance genre ) if not for the rushed ending that made me go wtf ! And because of this , I’m giving it a 5/10 instead, a rather huge rank -down, I know.

As I said before, I wouldn’t be giving a review. This is a straightforward discusiion of the plotline, my analysis  of it, and where it went downhill for me. Therefore, you need to  brace yourself for spoilers galore up to the ending, because the ending is where the author f*cked up. ( imho, that is ). So , if you’re averse to spoilers, this is where you stop reading.  But if you’re okay with it, and you haven’t seen this anime, please go watch it, then come back here , and let me know what you think.

But first, the story:

There are 4 main protagonists….. Banri Tanda, Koko Kaga, Mitsuo and Linda.  Banri is a kind, quiet, and nice law student  who happens to suffer from retrograde amnesia ( doesn’t remember anything that happened, including his friends, before the accident…. he gets hit by a motorcycle at the bridge in his hometown while waiting for the ” answer of yes or no” from the girl he has just confessed to during their graduation ceremony in high school.  ). Koko is  a very beautiful, rich, girl who is obsessively in love with Mitsuo, her childhood friend who doesn’t reciprocate her love… , he has even rejected her so many times, but Koko stubbornly   clings to his promise that they’ll marry when they grow up. Linda goes to the same university, a member of a cultural club , and yes,  she is that girl Banri ” was ” in love with.  Banri and Linda meet at one point, but he doesn’t recognize her, and Linda lets it be because she feels responsible for Banri’s accident .

Mitsuo and Banri become close friends.  It’s Banri who keeps Koko from meeting Mitsuo. He starts to pity her, and thru their frequent interactions, Banri  realizes   Koko is actually a kind but very vulnerable person. They fall in love and start dating.  They even join Linda’s cultural club. Then one day on Banris vacation to his hometown, he checks his HS class album and sees a photo of him and linda together. It triggers some flashbacks, and later confronts Linda about their past relationship. Linda admits they knew each other and even confesses that she’s the one he was  in love with, and the girl he was waiting for at the bridge .

Here’s the thing…. there’s a 5th protagonist in this story…. Banri’s spirit who’s been following him around,  the Banri of the past who’s still very much in love with Linda and has been struggling to get into Banri’s psyche so that he can recall his past .  Every now and then, the spirit succeeds and Banri starts to have feelings for Linda again, and in  one incident, almost cheats on Koko with Linda.  Koko sees it, Banri runs after her, and admits he still has feelings for Linda and he cannot help it. He does tell her he  loves Koko, too.  But he’s afraid   his present ” self ” and his present memories will disappear   the moment the past takes over his psyche. Koko forgives him for his  indiscretion and begs him to forget the past, and be with her forever.  But then, the spirit starts to take over Banri, making him forget some things that happen in the present, to the point that he doesn’t even know why he’s living at his apartment.

Sounds supernatural , doesn’t it ?  A spirit taking over, and Banri forgetting the present and everyone in it ?  Baloney. To me, that’s  just a load of crap .  It’s not medically possible.  What irks me is that the author  injects some sort of supernatural thing in the story to rationalize  and justify  Banri’s  change of heart, that is, leaving Koko and everyone behind to start another life with Linda.  Linda , the seemingly  kind and sweet  person is the sly one here. Though  she also loves Banri ,  she could have told Banri everything, that it’s alright he’s now with Koko, and she knows Banri and Koko love each other and therefore , Banri should move forward, live in  the present and future from now on.  However, at this point,  Koko is now  aware that Banri just wants to be with Linda.  She then  breaks up with Banri .  Banri  , at this point , is still struggling to stay in the present, but Koko breaking up with him shocks him, and I believe that’s the point he abandons his futile struggles  to be in the present.  He leaves Tokyo and the university, actually forgets he had a GF, forgets he has friends at school, and leaves everything behind, and goes back to his hometown with Linda. . She goes home with Banri.  How cunning of Linda.

Meanwhile, his friends from Tokyo cannot accept what happened to him, to Koko , and their friendship. They find out where banri lives,  and urge  Koko to visit him to find out how he is.  Koko goes, on the pretext that she’s just returning   the cds  she has borrowed , including the mirror that she says he had left behind.The mirror is one of the matching mirrors that Koko has given to Banri. ( couple mirror? ) She doesn’t tell him she’s Koko, and it’s useless, anyway.  Banri doesn’t recognize her. Then Koko asks where the famous bridge is because she wants to see it . And she leaves immediately. Banri checks out the the stuff Koko has given him, finds the mirror, and thinks there’s  a mistake because he has a  mirror,just like it( which is broken ) He looks at the mirror , the mirror breaks, and BAM  !! !  He suddenly remembers everything ! ! ! He runs after  Koko,  meets the damn spirit, the spirit gives back the ring Banri is supposed to give to Koko,   sees Koko, shouts KOKOOOOOOOOOOO ! they kiss and hug and promise to be together forever.  The End.

Here’s the thing….. I totally understand that  Banri  still loves Linda and wants to be with her. After all, they’ve been together since childhood, been classmates, and close confidants, and Linda has actually confessed to Banri that she loves him…  the author doesn’t need to make it supernatural and convoluted….. simply  write that Banri has  chosen to go back to his past and his true love  , and sorry, Koko,  I have loved you too, but Linda is the one I want to be with forever, and her answer to my confession the night of the accident was a YES ! So, I want to restart my future from there.   How easy is that?  It would make a lot more sense, and more drama , to watch Banri struggling to choose between his past and present life and love. We don’t need to suspend our disbelief that a person can actually forget the present by replacing it with the past, just because a spirit wishes it. If I have to analyze this clinically,   I can conclude  that the spirit is just his alter ego who wants Banri to leave Koko, renege on his promise to Koko that he will never leave her,  and go back to Linda. The spirit thing is just something to cover Banri’s change of heart, make him a sympathetic person , instead of a freaking asshole.

So okay, let’s say we accept the spirit is real. But does the ending have to be that rushed ? ” Who are you ? ”  Then the mirror breaks. In one instant, it’s Kokooooooo ! I love youuuuuu ! What the heck. Dude, do you also remember  what you just did to her ?

A better ending should have been Banri remembering little by little, one baby step at a time,  his love for Koko, and the way Koko loved him, and their promises to each other. He didn’t have this kind of relationship with Linda.

So that’s it. Waaaaaay too long, I know.

Anyway… I hope you get to watch Golden Time, and I hope that you can come  back here, and tell me what you think. Am I right or am I right. 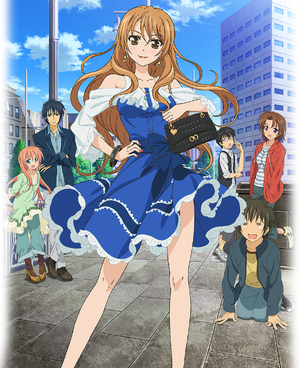 That’s Koko. The country bumpkin  right behind her is Banri, the girl in red jacket is Linda, and the tall handsome guy in black jacket  is Mitsuo.   Koko should have let go of banri, and find a better guy.  Koko is the most popular girl at school, and she’s so pretty guys are intimidated to approach her.  She is however oblivious t to all this .